The outbreak of the American Civil War altered the direction of Orlando Poe’s career. The peace time task of mapping and surveying the Great Lakes gave way to the new mission of war. Poe was an Ohio native; he first worked to organize Ohio volunteers. He later served as a member of Major General George McClellan’s staff, taking part in the Rich Mountain campaign and helping McClellan to organize the defense of Washington D.C. In September of 1861, Poe was promoted to colonel and was given the command of the 2nd Michigan Volunteers. Prior to the Northern Virginia Campaign of 1862, Poe was given command of a brigade. By the end of 1862, Poe was promoted to brigadier- general of volunteers, but in the spring of 1863 Congress let his promotion expire. He reverted back to his former rank of lieutenant in the regular army. He quickly was promoted to captain and then soon after to chief engineer of the Twenty-Third Corps. By September, 1863, while directing the defenses of Knoxville, Tennessee, Poe was promoted to chief engineer of the Army of the Ohio.

Strategic military planning required reconnaissance. Routes, waterways, and the enemy’s position were scouted out in advance of troop movement. Among Poe’s papers at the Clarke is a small notebook, with the title “Itinerary of Route from Knoxville, Tenn. to London, Kty.” This journey of roughly 100 miles was made in three days, from September 28 through October 1, 1863, a few weeks before the siege of Knoxville. At the present time we are unsure of the author of the journal. The first two pages of the journal have been transcribed and posted below. It is interesting to note the detailed drawings and the house by house recording of who is loyal and who is a rebel, hence being a “good subject to bleed.” 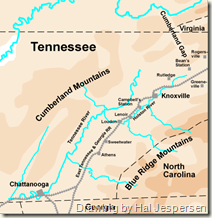 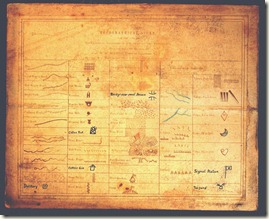 Map of the Knoxville / London area, by Hal Jespersen, and “Topographical Signs for the use of Topographical Engineers in the Army of the Cumberland” card found among Poe’s papers.

Transcription of “Itinerary of Route,” pages 1 - 4

McBurk’s Grist Mill on the left of creek emptying into Bull Run. Elijah Jenning’s house on the left of road, has been in the Confederate army, but has since taken the oath. Country rocky, composed of lime or slate stone, set up on edge. Some indication of Iron. Log church called Zion on the right of fork. Road branching to the left leads to Emory. Blazes creek on the right.
Road crosses Beaver Creek over covered bridge. Rebel camp on eith[er] side of road in the woods. Guide boar[d] 9 miles to Knoxville
Fork in the road, left hand leads to Brick Chaple or Frotter’s Mill. Right fork to Clinton. Roads very good, but will be bad in wet weather, Have been worked some by the rebels. Good timber country.
Plenty of water abound in good clean springs.

Wagon road & Rail Road through Gap between hills; wagon road in bad condition, rail road used in its place. no ties on the road. House on the right of road.
Road leads off to left to Lee’s Ferry across Clinch River. Henderson’s house on left a good, loyal citizen.
Yarnell’s house on the right; a strong rebel, rich with plenty of forage and stock. A good subject to bleed. Slaughter’s house on the left; loyal.
Road through very rough country. Wagon road leads of[f] to Right through Gap between hills. Woods on all sides.