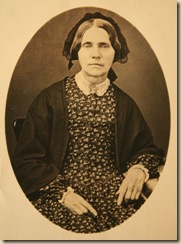 Posted below you will find two entries from the 1829 diary of Hannah Bingham. She wrote them in July of that year, at the close of a very long journey, from Wheatland, in upstate New York, to Sault Ste. Marie at the eastern end of Lake Superior. On July 11th her party has just crossed Lake Huron and has entered the Saint Mary's River, which will lead to the American outpost at the Sault. Hannah has come to Sault Ste. Marie to be with her husband, the missionary Abel Bingham, and she will remain at the Sault for the next twenty-six years, making a home, raising a family, and laboring in the cause of the mission. Her husband, whom the Baptist Board of Foreign Missions had sent to Sault Ste. Marie the year before, had returned to New York that spring to escort his family to Michigan.

As the entries show, Hannah probably had a limited education. Her handwriting, almost impossible to transcribe in places, presents the editor with many problems. Her commonplace use of the word savage and the pity she directs toward "the poor outcasts" reflect the rhetoric of the period and the clear divisions of her world into the civilized and the uncivilized. On a national level those divisions were becoming ever more sharply defined in the heat of the political debate that would lead in 1830 to the passage of the Indian Removal Act. In contrast to the prosaic journal entries her husband recorded in his journal for the same period, Hannah's diary entries express not only a strong faith in her purpose but also express her fears and her feelings. She kept diaries from 1817 to 1868. Taken together, written from the perspective of an early missionary wife, those journals comprise a very special documentary collection.

A great-grandson of the Binghams, Duncan McKee, donated the Bingham Family Papers to the Clarke Library in 1962. The papers fill twenty-eight manuscript boxes. Over half of this collection pre-dates the Civil War. To appreciate ante-bellum Sault Ste. Marie one has to spend time with these papers. The Bentley Library at the University of Michigan also has a collection of Bingham papers and these include some of Hannah's diaries.


After being tossed over the Huron for three days [we] came into the river yesterday morning, and now we are safly moored in this pleasant river not far from our long sought for home, where we can see mountains, rocks, and islands with their beautiful green, and the birds too are sweetly singing around on the shore. I have been considerably seasick but feeling in good spirits this morning. I have had two sleepless[1] nights, last evening especially, but generally have slept well. The appearance of the natives yesterday affected me considerably, though not so much from their savage looks as from the discription the Inhabitance gives of their being a barberous wicked people, but this is what I must expect. I may yet enjoy many a sweet hour with even the poor outcasts. The sweet morning comes and sweeps away gloom. The idea that God is calling us here and that He is evry where pressent makes our future prospects, even in this secluded spot, appear pleasant.


Sabbath Evening. We came about a dozen miles yesterday in an open boat against the wind & tide and with some difficulty reached Ste Mary(s) a little before night. Mr. Hulbert[2] opened his doors to receive us. Although we had to leave many of our things & was not well prepared for the Sabbath, yet I felt happy & nothing troubled me. Our concerns for God had blessed us in bringing us safly to this heathen shore. Today is a beautiful one not a cloud is to be seen, but what makes it more beautiful is that it is Gods day & I have been permitted to go to His House for worship, first with the sitizens and then with the Indians. It was indeed a feeling time with me to see them flocking in to hear the gospel, and to see them so ignorant of the way of life and salvation affected my heart. Truly, I said with in my heart, the time to favour Zion is now a coming, and the poor Chipaway are about to receive the precious treasure.

[1] Hannah here uses the “long S,” which in early nineteenth century handwriting was used to write words that had a double “s.” The letter often looks like a modern day “f.”
[2] John Hulbert came to Michigan Territory on horseback in 1824, from Guilford, Connecticut. He established himself as a merchant at Sault Ste. Marie, where he held the positions of village postmaster and fort sutler. He married Maria Schoolcraft, a sister of Henry Rowe Schoolcraft, the Indian agent at the Sault. See Charles Moore, History of Michigan (Chicago: Lewis Publishing Company, 1915), 1:447-48n6; and Richard G. Bremer, Indian Agent and Wilderness Scholar: The Life of Henry Rowe Schoolcraft (Mount Pleasant: Clarke Historical Library, 1987), 102. 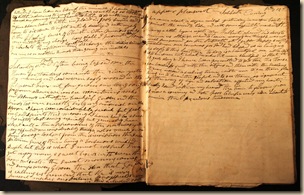 “July 7th Tuesday got into Lake Huron and on Saturday 11th

arrived at this place”

Clarke Historical Library’s manuscript collections sometimes contain artifacts as well as documents. This handmade, small boy’s vest was found with Hannah Bingham’s diaries. It is possible that she made the vest for her son Judson, who was approximately two years old at the time. There is a tag sewn on the front of the vest, which reads, “This vest was made in 1822, by Hannah Brown Bingham. The cloth of the back was woven by her. It was made for a boy two years of age."