In 1818, President James Monroe appointed Alexander Wolcott Jr. MD (1790-1830) to serve as agent at the Chicago Indian Agency, one of nine agencies under the direction of Gov. Lewis Cass, Superintendent of Indian Affairs in the Michigan Territory.  Cass placed great confidence in Wolcott.  In 1820 Wolcott accompanied Cass on an expedition to the headwaters of the Mississippi River.  The following year he assisted Cass in negotiating the August 1821 Treaty with the Ottawa, Chippewa, and Pottawatomie Indians, which surrendered to the United States what is now the southwest corner of the State of Michigan.

The contents of the following letter can be found in a small collection of Lewis Cass papers at the Clarke Historical Library.  The majority of letters in this collection were written during Cass’s tenure as territorial governor and concern administrative matters.  The letter presented here was sent by Alexander Wolcott to William Woodbridge. The transcription retains Wolcott's original spelling and capitalization; however, for the sake of readability, his punctuation has been standardized. The letter centers on Wolcott’s efforts to purchase goods in Detroit for the Chicago Agency, and it testifies to Wolcott’s passion for public service, a passion that manifested itself even in routine endeavors.  His enthusiasm for unremarkable tasks—being able to recognize these duties as part of something broader—set Wolcott apart.  At the time, John Quincy Adams’s administration was under political fire to cut expenditures, and the Indian Department served as a prime target for such attacks. In purchasing goods at the markets of Detroit to save costs, Wolcott was looking for a way to reduce some of the budgetary burden facing the Superintendency.  He was also lessening the exposure of the Indian Department.  A loyal and capable manager, Wolcott remained the Indian agent at Chicago until his death at the age of forty.

Transcription of the letter from Alexander Wolcott Jr. to William Woodbridge, informing the latter on
cost-cutting endeavors


Detroit June 19, 1825
Sir,
I have had the honor to receive your note of this morning, & have the pleasure to state to you in writing, as heretofore in conversation: that I have come to Detroit at this time for the purpose of purchasing articles for presents to the Indians of the Chicago Agency for the ensuing year; that by making my purchases in this market I can get the goods at least fifty per cent cheaper than I can at Chicago, making thereby a saving to the Government of two or three hundred dollars; that on my arrival here, three or four hours before the departure of Governor Cass, I mentioned the subject to him; that he approved of my drawing in advance, & said that he would speak to yourself, & to the President of the Bank, on the subject, & that I should find no difficulty in procuring the money, even though the Department should be obliged to overdraw on the bank, as the bank was under some obligation to the Department, & would be willing to accommodate it to the extent of my draft. I had hoped to be permitted to draw for the whole sum necessary to cover my estimated expenditures, (viz.) $1750, but governing myself by the suggestions of your note, I have drawn for the sum of $1500 on the Secretary of War, in your favor, which drafts are herewith presented. I have the honor to be, Sir,
Your Most Obt. Humle Sevt1
Alex. Wolcott Jr.
Indian Agent.
Hon. William Woodbridge
Actg. Superintendent of Indian Affairs.2


_____________________________________
[1]“Your Most Obedient Humble Servant.”
[2]William Woodbridge, Territorial Secretary, was serving as Acting Superintendent in Cass's absence.  Five days earlier Cass and retinue had left Detroit for Prairie du Chien, where Cass would conclude a treaty of peace among the Indian nations living in the vicinity of the Upper Mississippi River. For more information on Woodbridge see: Emily George, Michigan's Connecticut Yankee (Lansing: Michigan History Division, Michigan Department of State, 1979).

Images of the Letter from Alexander WolCott Jr. to William Woodbridge. 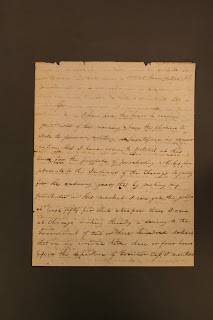 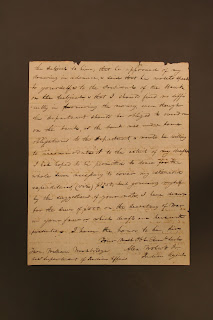 Further reading on the Michigan Superintendency

This is a great post. Kelly, nice job on this! You are so intelligent.